After giving birth, up to 90% of smokers take up the habit again!

In a revealing study from The Guardian below, within certain groups of women, up to a staggering 90% of those that smoked before being pregnant then take up the habit again. Many of them believing that it helps them cope with stress and regaining their identity again.

Within my hypnotherapy practice I work with many smokers who, after therapy never ever smoke again. One of the areas that we cover is the mistaken belief that smoking helps with their stress. Ironically, smoking chemically changes the brain to be able to deal with stress even less.

Why? Well, we are motivated, when we are coping day to day and have a positive outlook on life, one of the outcomes is that we produce serotonin (a neurotransmitter that promotes the ability to resolve life’s problems and helps us have a happy life). When we smoke, whilst the brain will get a shot of dopamine (as in any chemical high such as drugs, alcohol etc) and give us a mini-high, we don’t produce the follow-on chemical release of serotonin, unlike doing something positive which gives us both. Our brain encourages us to have another cigarette in lieu of more positive actions in one’s life normally stimulated by a production of serotonin, in the belief that any stimulation award is better than none. Thus we smoke more and more, yet become less and less motivated, less able to cope and generally be less happy.

The clear message is to stop smoking and you will feel better and more able to cope with life. Most of us are able to stop if we really want to, however if you can’t then hypnotherapy is regarded as the most effective way to do so; better than patches, chewing gum and vaping. Contact your local hypnotherapist now or if you live in the Bath, Wiltshire area then give me a call, new mother or not, it’s never too late to stop. 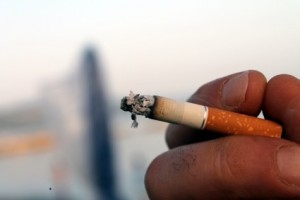 Peer pressure, physiological changes and regaining a sense of identity among other factors driving mass relapse among those who quit while pregnant.

Sleepless nights and the stress of caring for a newborn are driving mothers who stopped smoking in pregnancy to light up again, despite the potential damage to their baby.

New research shows that the strains of motherhood are leading up to 90% of women who had quit to resume smoking, especially those from poorer backgrounds.

A study of interviews with 1,031 women who had given birth found that some mothers go back to cigarettes under pressure from friends or because they see it as a way of regaining their identity.

The findings prompted calls for “a cultural shift” so that quitters do not relapse once they become mothers.

“We found that many women see smoking as a way of coping with stress. They also believe that physiological changes influence cigarette cravings, and that they no longer need to protect the baby from smoking’s harmful effects,” said Dr Caitlin Notley, the lead author and a researcher at the University of East Anglia’s medical school.

“Women who saw smoking as a way of coping with stress were more likely to relapse. Feeling low, lonely, tired and coping with things like persistent crying were also triggers. Women reported that cravings for nicotine which had lessened or stopped during pregnancy returned,” Notley added.

Notley’s findings are in stark opposition to recent NHS data. The most recent official figures on smoking and motherhood, from the NHS health and social care information centre’s infant feeding study in 2010, show that of the 26% of women who are smokers before or during pregnancy, a narrow majority – 14% – had kicked the habit by the time they their baby is born, with the other 12% smoking throughout pregnancy.

Women’s beliefs about smoking are “a major barrier” to quitters continuing to stay smoke-free in motherhood, added Notley, whose team at UEA analysed 22 previous papers on the subject. Their findings are published in Thursday’s edition of the medical journal Addiction.

“Many felt that smoking after the birth of their child was acceptable provided they protected their babies from secondhand smoke. Their focus is, admirably, on the health of the baby, but they often do not think about the long-term consequences for themselves as mothers.”

Women with no partner or with a partner who smoked were much more likely to relapse, they found. However, most women who remained smoke-free after giving birth said their partner’s support in doing so was an important factor.

“Partners who gave up smoking, or altered their own smoking behaviour, were a particularly good influence. And those who helped ease the stress of childcare were also praised by women who had resisted the urge to light up,” said Notley.

Rosanna O’Connor, the director of alcohol, drugs and tobacco at Public HealthEngland, urged women who smoke to quit in pregnancy and stay away from cigarettes once they had become mothers, but acknowledged how hard that can prove.

She said: “Stopping smoking is the best thing a woman and her partner can do to protect their own health and the health of their baby, both during pregnancy and after.

“Quitting and remaining smoke-free can be difficult and, like many smokers, parents may need help.”