Frequent use of high potency pot may lead to brain damage 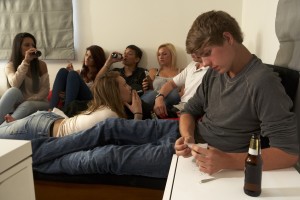 In a recent article below, a new study has discovered in addition to the increased risk of psychosis of long term cannabis use, the higher potency “skunk” variations have now been linked to brain damage.

As a therapist I work regularly with people with dependencies and see first hand how smoking, alcohol and drugs can all lead to increased anxiety, stress, depression and anger. This is due to a combination of both the chemical effects of these activities (reduced serotonin levels) and the emotional reasons for why people needed to take them in the first place: happy, content and confident people are intellectually in control of their lives and so refrain from destructive behaviour.

I see the ‘excitement’ from many people of the legalisation of cannabis becoming a possibility and as a therapist, if this happens, my waiting room will be filled with people who have lost their way.

Simply ask yourself: are the people you know who take drugs, drink heavily or smoke, totally in control of their lives, happy, dealing with problems in a calm and appropriate way and always seeing opportunities? If they aren’t then maybe you’ve already got your answer.

The best drug is self-generated motivation and achievement!

Frequent smoking of high potency “skunk-like” cannabis can damage a crucial part of the brain responsible for communication between the two brain hemispheres, according to a new study.

Researchers have known for some time that long-term cannabis use can increase the risk of psychosis, and recent evidence suggests that alterations in brain function and structure may be responsible for this greater vulnerability.

The new study, published in Psychological Medicine, is the first to examine the effect of cannabis potency on brain structure, according to researchers at King’s College London and Sapienza University of Rome.

The scientists note that today’s high potency “skunk-like” products have been shown to contain higher proportions of Δ9-tetrahydrocannabinol (THC) than they did around a decade ago. In other studies, THC has been shown to induce psychotic symptoms.

“We found that frequent use of high potency cannabis significantly affects the structure of white matter fibers in the brain, whether you have psychosis or not,” said Dr. Paola Dazzan, a reader in Neurobiology of Psychosis from the Institute of Psychiatry, Psychology & Neuroscience (IoPPN) at King’s College London, and senior researcher on the study. “This reflects a sliding scale where the more cannabis you smoke and the higher the potency, the worse the damage will be.”

The researchers used diffusion tensor imaging (DTI), a magnetic resonance imaging (MRI) technique, to examine the white matter in the brains of 56 patients who had reported a first episode of psychosis at the South London and Maudsley NHS Foundation Trust (SLaM), as well as 43 healthy participants from the local community.

The researchers specifically examined the corpus callosum, the largest white matter structure in the brain, which is responsible for communication between the left and right hemispheres. White matter consists of large bundles of nerve cell projections, called axons, which connect different regions of the brain, enabling communication between them, the researchers explained.

The corpus callosum is particularly rich in cannabinoid receptors, on which the THC content of cannabis acts.

The study found that frequent use of high potency cannabis was linked to significantly higher mean-diffusivity, a marker of damage in white matter structure.

“This white matter damage was significantly greater among heavy users of high potency cannabis than in occasional or low potency users, and was also independent of the presence of a psychotic disorder,” said Dr. Tiago Reis Marques, a senior research fellow from the IoPPN at King’s College London.

Dazzan noted that there is an “urgent need” to educate health professionals, the public, and policymakers about the risks involved with cannabis use.

“As we have suggested previously, when assessing cannabis use it is extremely important to gather information on how often and what type of cannabis is being used,” she said. “These details can help quantify the risk of mental health problems and increase awareness on the type of damage these substances can do to the brain.”

Click on this link to read the original article from Psychcentral