As a hypnotherapist that regular helps smokers give up the habit, this interesting article provides us with a review of the last 10 years since the smoking ban. Very fascinating it is.

For those of you still smoking don’t despair as help is available. Click here to read more about giving up.
Comment by Mark Jones

It’s 10 years since smoking was banned in enclosed workplaces in England, following similar moves in the rest of the UK. But how has the “pub smoking ban” changed the country?

Do you remember the time when pubs were full of smoke? When you could light up after a meal at a restaurant? Or when smokers didn’t have to congregate on the street outside offices?

The law, which marked a fundamental shift in attitudes towards smoking, is now 10 years old.

It banned smoking in all enclosed public places and work places when it came into force in England on 1 July 2007. Scotland, Northern Ireland and Wales had already taken the plunge over the previous 18 months.

Its backers justified it on the basis that smokers were putting others at risk by exposing them to second-hand smoke. But opponents suggested the risks from passive smoking did not justify the attack on smoking.

1. The country fell into line

At the time the move was controversial. The health lobby fought for decades to get it introduced and right up until the last minute ministers considered all sorts of exceptions – retaining smoking rooms or allowing certain premises to be exempt.

But once introduced, the country soon fell into line. Councils were charged with policing it. In the first 18 months officers inspected nearly 600,000 premises. Few broke the rules. 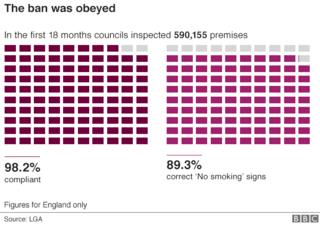 Public backing grew and grew – and remains strong today. A poll of more than 4,000 adults by YouGov released for the 10th anniversary found nearly three-quarters of people would oppose the ban being overturned, with just 12% wanting to get rid of it.

But other polling does show opinion is pretty split on whether the complete ban could be modified – such as by the introduction of designated smoking rooms in pubs and clubs.

Some publicans and other critics say the smoking ban played a large part in this. Simon Clark, of the smokers’ rights lobby group Forest, says the impact has been “devastating”.

But there are other factors too. There has been a massive decline in the amount of beer people drink.

The British Beer and Pub Association cites the rise in the tax applied to drinks – and beer in particular. The beer duty escalator meant that between 2008 and 2013 the duty increased by 42% and this has come at a time when supermarkets have tried to entice shoppers in with discounts on booze.

At the same time as the smoking ban came in, the economic crash was about to start. It had a massive impact on incomes in the UK. Average real-terms pay is still below where it was 10 years ago.

With all these factors happening at the same time, BBPA spokesman Neil Williams says it is “pretty impossible” to unpick exactly what the individual impact of the ban has been.

And of course, many pubs have thrived since the smoking ban, changing to focus more on high-quality food and trying to attract families – including those with young children – who would previously have avoided smoky atmospheres.

“Pubs have had to adapt. We’ve seen those that can invest in food and they’ve made a very good job of it.

“But some pubs – the traditional street-corner boozer – simply haven’t had the space to do that. They are the ones that have suffered.”

And there’s a wider picture. People in the UK seem to be drinking less.

The Office for National Statistics says that between 2005 and 2016, the number of people saying they had had anything to drink in the previous week fell from 64% to 57%. The numbers drinking on five days or more a week nearly halved over that time.

3. There are fewer smokers

Smoking rates are falling. Today fewer than 17% of people smoke. But as the graph below shows the downward trend goes back decades – and there was actually a slowing of the rate of decline immediately after the ban. 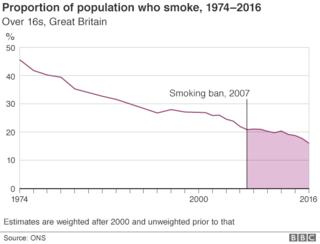 Most experts agree that is understandable. As the numbers fall, what you are left with is a more hardcore group of smokers whom it is hard to persuade to give up.

4. The young have been turned off smoking

There are fewer young people taking up smoking. The numbers have halved since the introduction of the ban.

But again it is difficult to work out quite how much of that is down to the 2007 legislation.

When you look at drinking rates, drug use or teenage pregnancy numbers, they tell a similar story.

There is a clear pattern – the young have changed the way they behave.

This consistent trend has not yet been properly explained. One of the few convincing theories centres on social media – the idea is that young people spend so much of their time online that it has replaced other vices.

5. Attitudes of smokers have changed

The ban also encouraged some existing smokers to give up. Following its introduction there was a 23% increase in quit attempts made via NHS stop-smoking services.

Research suggests the ban was particularly effective at raising awareness about the risks of second-hand smoke – people were motivated to protect those they smoked around, as well as looking after their own health.

The YouGov poll also provides some evidence. It found 14% of ex-smokers had been influenced in their decision to quit by the ban, while 20% of current smokers say they smoke less because of it. 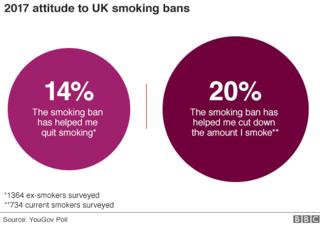 But you can’t ignore the influence of e-cigarettes either. Vaping has offered a healthier, more socially acceptable alternative to smoking.

Momentum was just gathering in 2007, but figures from the Office for National Statistics show that today one in 20 people over 16 regularly uses e-cigarettes – a quarter of them are smokers or ex-smokers.

But not every measure shows such positive results.

England still has a relatively large number of women who smoke during pregnancy – one in 10 at last count , although the figures are admittedly falling.

Policymakers have been so worried about these numbers that they have tried offering financial incentives, such as shopping vouchers, to pregnant women who quit.

7. The rich and poor divide

There also remains a large discrepancy in the income levels between who smokes and who doesn’t. Those with the lowest incomes are twice as likely to smoke as people who come from the highest income groups – a gap that refuses to budge even as smoking rates fall. 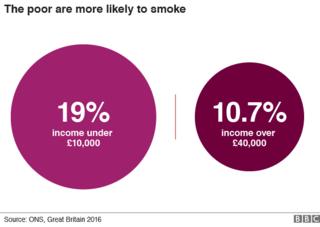 Tackling this discrepancy has been a major focus of health campaigners in recent years.

Smoking rates are a significant factor in the differences in life expectancy and health outcomes.

Talking of health, how has the ban affected the rates of illness and disease? In the years after the ban there was a flurry of research looking at what impact it had had.

The Department of Health commissioned an evidence review that was published in 2011.

It highlighted a fall in respiratory illness reported by bar workers immediately after the ban.

The review also flagged up research that showed hospital admissions for heart attacks fell by 2.4% immediately following the change in the law. That was the equivalent of 1,200 heart attacks a year.

Cancer Research UK chief executive Sir Harpal Kumar believes the impact on health will continue to be “huge” and that the ban should be viewed as one of the most important public health measures of recent history.

9. It will take time to assess the health benefit

But truly assessing the impact on health will take some time. Overall hospital admissions and deaths attributable to smoking have been falling in recent years, but only slowly.

The fact remains that it takes some time for the impact of lower smoking rates to influence health outcomes.

Take lung cancer, for example. About 85% of cases are caused by smoking. But if you look at the number of cases being diagnosed, the figures for men and women were going in the opposite direction until 2012.

The rising rates in women seen after 2007 are not, of course, because the ban had opposite effects on men and women. Instead it is to do with what was happening half a century ago, because of the long lag between smoking and cancer developing.

It was not until the mid 1960s that the numbers of women smoking eventually peaked. For men that happened at the end of World War Two, hence lung cancer cases have been falling for over 20 years in men.

10. Getting tough on smoking

But one thing we can see clearly 10 years on is how the global appetite for anti-smoking legislation has grown. While the UK took its time in introducing the ban, since then ministers have proved to be more decisive.

When the legislation was introduced, England was following the herd. The Republic of Ireland was the first country to introduce a complete ban in 2004. A host of other countries from the US and Canada to Australia had taken their own steps too by 2007.

But others have quickly followed suit and now smoking bans – whether full or partial – are commonplace as this chart (which is by no means exhaustive) shows.

Over the past decade there has been a flurry of new legislation – and the UK has often been at the forefront.

The age at which people can buy tobacco products has been raised from 16 to 18 and they are no longer stocked in vending machines.

Bans of tobacco displays in shops have also been introduced, while cigarettes now have to be sold in standardised packages and smoking is not allowed in cars carrying children.

Locally, a number of town halls have also sought to take their own steps, with some looking at bans in parks, squares and outside areas used by restaurants and pubs. The ban, it seems, has opened the floodgates.

To read the original article from the BBC click here.